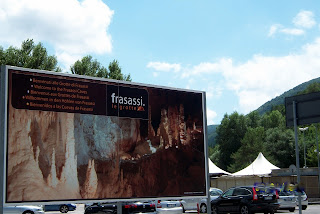 From Milan we took the Eurostar train to Ancona; it was a very comfortable journey of 3½ hours.We stayed with friends in Appignano for five marvellous days last month.  We absolutely love the Le Marche region too. I believe that every region in Italy has its own distinct landscape, customs and cuisines and this is what makes it so wonderful.

Early one morning our friends drove us to visit the famous caves of Le Marche - Le Grotte di Frasassi. It was a drive of about 40 minutes from where we were based.

The scenery along the way was typical of the gorgeous Le Marche interior: undulating hills cultivated with sunflowers, olive trees and various crops. 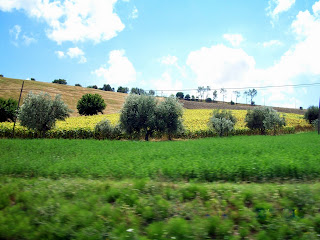 In contrast to most of Le Marche, Frasassi is geared up for tourists. We were surprised to see so many food and souvenir stalls surrounding the large car park in the village of San Vittore on the outskirts of Genga, where the ticket office is also located. At first the price of €15.50 per adult seemed a bit expensive, but it also includes transport to the caves by shuttle bus, a guided tour, entrance to the paleontological museum in San Vittore and the Art History and Territory Museum in Genga – hence a full day out.

The Grotte di Frasassi which extends for 35km is the largest underground cave system in Europe. This subterranean world of calcareous rock formations dates back 180 million years! These incredible caves were first opened to the public since 1974 and have since been visited by over ten million people. The temperature inside is 14C but there was 90 percent humidity so it didn’t feel cold. It was actually a welcome relief from the 35C temperature outside.

There is about an hour of easy walking through a maze of spacious pathways. Magnificent ‘rooms’ which reveal nature’s masterpieces in this strange and beautiful underground world are given the most ingenious names: The majestic Ancona Abyss, The Infinite Hall, The Hall of Candles, The Obelisk and The Emerald Lake.


﻿Small sparkling lakes with pools of clear still water, extravagantly fanciful stalactites, towering columns of stalagmites and alabaster spears adorn these caverns. The caves are further enchanced by the skilled use of soft theatrical lighting. One and a half km of this crystalline wonderland is open to the general public. It also includes the awesome Grotta Grande del Vento (The Great Cave of the Wind), Europe's largest single cavern. You could choose to have a guided tour in Italian, English, Spanish or German. The English guide we had was excellent and very informative, pointing out with her torch the natural sculptures that could be seen in the rock formations that we probably wouldn’t have noticed otherwise.

A visit to the magical world of the Grotte di Frasassi is a unique and incredible experience. Both adults and children will be fascinated by this extraordinary, hidden, enchanting world.