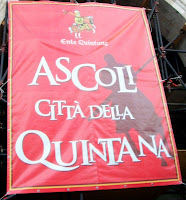 We visited the stunning medieval town of Ascoli Piceno (see map) in Le Marche on the first Sunday in August, which luckily for us, coincided with their annual celebration of the Quintana. The Quintana is a historical medieval jousting tournament held on the feast day of Sant’Emidio, the town’s patron saint. When we arrived it looked as if we had stepped onto a film set, as we were transported back to another era. Hundreds of townspeople, dressed in full ceremonial 15th century costume, colourful flag-throwers (sbandieratori) and trumpeters marched past us along the main street to a steady drumbeat. There was a real carnival atmosphere in the town. 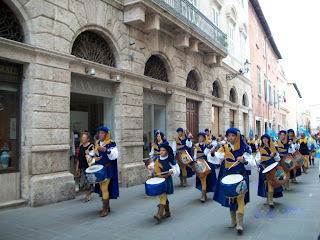 Piazza Arringo was their destination. This huge travertine-paved piazza, that shines like marble, is absolutely breathtaking and surrounded by magnificent architecture. A religious procession followed, in which the statue of Sant’Emidio was carried on the back of a cart drawn by two oxen to the Cathedral of Saint Emidio.


﻿
At both ends of this piazza are pretty twin fountains, depicting dragons, seahorses and a dolphin like figure on the top. In Piazza Arringo you will also find the Municipal Art Gallery La Pinacoteca Civica, with one of the richest collections of religious paintings in Italy, including works by Carlo Crivelli, Titian, Tintoretto and Guido Reni.

Six knights came by with the banners of their districts displayed behind them. What we didn’t realise at the time, was that the jousting tournament (La Quintana) was going to take place in the local stadium after the procession. The six knights ride a course one after the other trying to hit an effigy of a warrior. Strength and agility are necessary for the knight to win the palio or grand prize

Once the excitement of the parade was over we strolled around the charming piazza admiring the elegant buildings. We got a glimpse of the rest of this beautiful town from the quaint narrow side streets. I would have loved to have had more time to explore its many alleyways, bridges, pretty shops underneath the porticoes and its many towers. Ascoli Piceno is also known as the 'town of 100 towers' although there are 'only' 50 of them left today.

Since the late 1300s, competitions for flag-throwing and archery take place during weekends in July with the main event, the Quintana, held in August. For the citizens of Ascoli Piceno these festivals are the expression of a rich history inextricably linked to their territory. Many of the town’s population of 51,000 participate in these events which connect them to age-old traditions and every detail of these celebrations is orchestrated to perfection. I felt privileged to have witnessed this fascinating ceremony. Even without this impressive festival, Ascoli Piceno is a very captivating town and well worth visiting at any time of the year.

Piazza del Popolo nearby, is surrounded by magnificent buildings such as the Palazzo dei Capitani, the Loggia dei Mercanti, the Gothic church of San Francesco and the famous Caffè Anisetta Meletti. There is so much more to see in this piazza alone, so I will leave that for the next post. One day is just not enough to experience all of the wonders of Ascoli Piceno!