A Day in Bologna

If you are visiting Rome, Florence, Milan or Venice it is worth planning a detour to experience the architectural, artistic and culinary delights of beautiful Bologna. This summer was our fifth visit to this alluring, colourful city. Usually we stay for just a couple of nights but on a day trip you could manage to see several of the main attractions.

What exactly can you see in just one day you may ask? Well, the city centre is quite compact so it’s easy to get around on foot. Some great things about Bologna that I like are that:

Piazza Maggiore, the magnificent main square is a good place to start. Get a free map of the city in the large tourist information office opposite the cathedral before you begin your exploration. First off, inside the gothic interior of Basilica San Petronio on the left of the square, there is an interesting Zodiacal sundial 67m long on the floor. It was created by astronomer Domenico Cassini in the 17th century. If you look up you’ll see a tiny window in the apse where the sun shines through illuminating the meridian line which shows the exact period of the current year.

The Palazzo Comunale (Palazzo d'Accursio), the elegant adjacent building, is home to three museums with many illustrious and priceless works of art throughout. A huge Bramante stairway leads to the first floor; the low, wide steps were to allow those on horse-back access to the upper floors. The museum of painting and decorative objects on the first floor has richly frescoed ornate rooms with lovely views of the piazza from the windows. In the Sala Farnese on the second floor, the ceiling from the 1800’s is beautifully illustrated. If you are interested in art you’ll enjoy the Morandi museum on the third floor. It contains about 200 paintings by Bologna born artist Giorgio Morandi (1890-1964) the greatest Italian still life painter of the 20th century. The collection spans his career from youth to maturity.
﻿

Leaving the building around the corner you’ll find yourself in the adjoining Piazza di Nettuno. Take the time to admire all the details of the stunning Neptune fountain.

Continue down the street towards the Two Towers. The russet, orange, ochre and yellow of the surrounding buildings are magnificent and most of the roofs have red terracotta tiles. If you climb the 498 steps to the top of the Asinelli tower at the end of this street you can see them and view a marvellous panorama of the city.

Near the Two Towers is the gorgeous, atmospheric, Piazza Santo Stefano – a must-see. 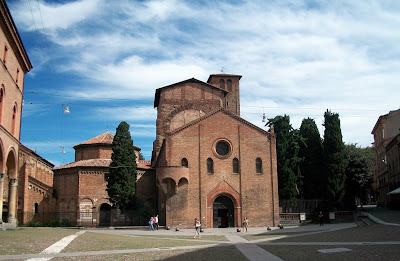 The tranquil church of Santo Stefano is a unique cluster of 7 churches and temples with two cloisters attached dating from the 8th century. It is fascinating to wander around these stunning churches and see the different styles of architecture within. Stop for a coffee at the charming café nearby and soak in the ambience of serenity. (By the way, in addition to your coffee many places here serve a complimentary glass of acqua frizzante.)

Head towards Via Clavature to see the amazing sculptures in the Santuario Santa Maria della Vita (which I wrote about in my previous post) and then explore the tiny side streets with many small food shops in the medieval market area. There are fishmongers, vegetable vendors, chocolatiers, homemade pastas, salumi (cured pork, beef, lamb or veal) and cheeses at La Baita. Check out the mouth-watering pastries and the panificio on via Orefici. Bologna has so many good restaurants, trattorias and osterias; I believe that no matter where you choose to eat in this city you’ll have a wonderful meal. If you want a quick takeaway lunch Pizzeria Il Mascalzone on via dell'Indipendenza is the place to go.

Now for one of Bologna’s secrets…If you continue walking down towards via Piella and cross a bridge you’ll come to a wall with a little window cut out in it about two feet square. When you look through this window you’ll get a surprise…
﻿
Last summer our friend Enrico pointed this out to us. I don’t think that we would have ever discovered it by ourselves. He said that not many tourists have come across this window, but now you know where to find it! It is also known as Piccola Venezia, the last of the canals of Bologna which date back to the 12th century.

The shops re-open about 3.30pm. One of my favourites is the Feltrinelli bookstore. I always return from Italy with Italian books, CDs or DVDs.

Lastly, you could end your day with a hike up to the beautiful Santuario di San Luca. We first went there in August 1998 so the photos below are scanned. The sanctuary is located on the hill that oversees the entire city. Take bus number 20 from the city centre to the stop at the Meloncello Arch. Bologna has a frequent and efficient bus (and train) service. From here it is a 4k walk to the church at the top under the world's longest portico of 666 arches and you'll pass 15 frescoed chapels along the way. Built in the mid 18th century it offers lovely views over the city and countryside. 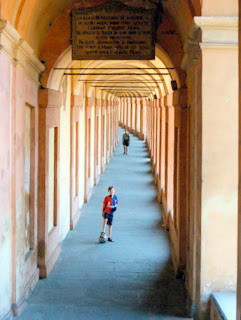 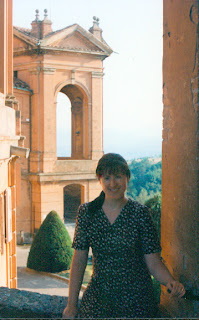 You could have dinner up here in the evening at Trattoria Meloncello or back down in the centre where there is such a large choice of superb restaurants including Ristorante Biagi, Osteria al 15 and Da Cesari.

During July and August there are free films outdoors on a giant screen in Piazza Maggiore at 10pm. With a gelato in hand, sitting in the piazza, watching a movie in the open-air on a warm summer’s night is a magical way to end a day in Bologna. You could easily spend a week here and still not see all it has to offer! 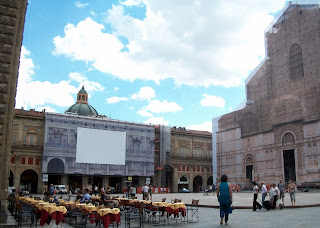 If you are here for more than one day you could visit the  three main museums: the Medieval City Museum, the Archeological Museum and the wonderful Pinacoteca. Bologna gives you so many things to do and see but it's up to you to choose how to experience this fascinating city. Have you been to Bologna yet? What would you include as a must-see here?

Update: For a walking itinerary in Bologna complete with an interactive map have a look at this excellent post at https://delightfullyitaly.com/2015/03/08/bologna-in-one-day/

My other post about Bologna: A Night in Bologna
Posted by Nora at 9:37 PM