The Magic of the Rocca Calascio 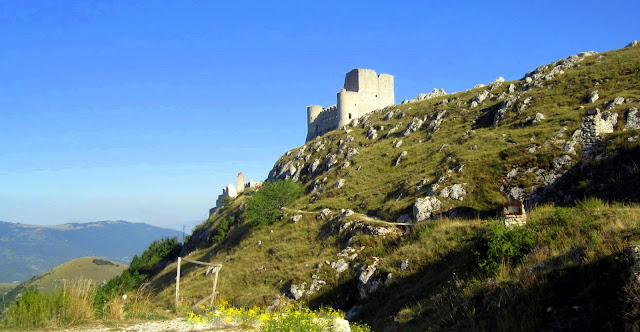 I finally succeeded in visiting the dramatic Rocca Calascio after a long time wishing to see it. The problem has always been getting there. We haven’t been brave enough to rent a car in Italy yet and have managed most of our trips so far around Abruzzo using buses and trains. The journey is through mountainous terrain with narrow rocky roads, many of which have no guardrails.

By bus from Pescara you have to change at L’Aquila and wait for four hours there to get another one to Calascio. As there is no bus back in the evening you would have to stay there overnight. Fortunately for us we discovered Daniele, a guide/driver for the region who speaks English and includes the Rocca Calascio in his tours.

Daniele departed from Pescara in the direction of Rome and left the highway at the Bussi exit. We stopped along the way and marvelled at the atmospheric, ancient Abbazia di San Clemente in Casauria. It was built in 871 AD and just recently reopened following restoration after being damaged in the April 2009 earthquake. 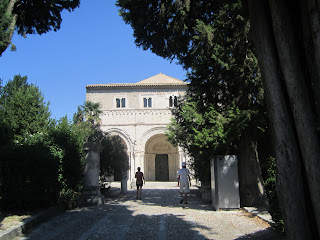 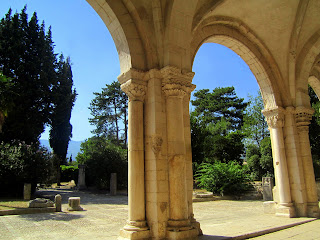 Next we made a short stop at the church of San Pietro ad Oratorium with its ‘magic square’ (on the left hand side of the main portal) and we admired the crystal clear Tirino river near Capestrano.

Then he drove in the direction of L’Aquila, turned at Ofena and continued on to Calascio. The whole journey took about an hour and a half. He bravely negotiated the breathtaking winding roads up to the small medieval village of Calascio at the foot of the castle. These roads are so narrow that when we met a string of cars going in opposite direction there was no room to pass; so the cars in front had to reverse back to a safe spot. 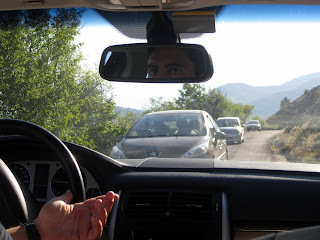 On another bend there was a break in the guardrail as if a car had crashed into it and the two sections were held together with a string of red and white striped ribbon to prevent cars from going over the edge!

The Village of Calascio

The houses in the village of Calascio curl around the base of the mountain forming a defensive wall. The startling scenery around it is of rugged towering mountain ranges over valleys and immense plains. We rambled through the narrow village streets and stopped at the Rifugio della Rocca, a charming small restaurant and hotel with a simple, rustic and cozy interior. If you take the bus this would be a lovely place to spend the night. Sheep graze on the hillsides around and the villagers cultivate lentils and saffron in the valley below.

Reva, an American girl who is working her way around Italy, joined us for this tour. She also has an interesting blog about her travels called Here’s to Italy. Together we hiked from the village following a rocky path towards the impressive white limestone fortress. The day was sunny and hot 32C (96F) with incredibly clear blue skies. Halfway up the hill we passed the beautiful octagonal church of Santa Maria della Pietà standing on a solitary plateau.
﻿
﻿It was built between the 16th and 17th centuries, when the Rocca Calascio was the property of the Medicis. The door of the church was open and being curious we headed towards it eager to see how it looked inside. We considered ourselves fortunate as Daniele said that it was usually closed. Alas, there was a private ceremony taking place and we were not allowed to enter. John however got a chance to take this quick photo of the interior from the doorway with his phone.

The Fortress of Calascio

A little history: At 1460m above sea level the Rocca Calascio is the highest and one of the oldest fortresses in Italy. It was built as a single watchtower in the tenth century for military purposes. There is a walled courtyard with four cylindrical towers at the corners. A taller inner tower was added in the thirteenth century. It was badly damaged by an earthquake centuries ago and never rebuilt so now only the exterior walls remain. Even though it is in ruins it still looks imposing. This drawing by Silvio Germano shows how the Rocca Calascio would have looked in the thirteenth century… 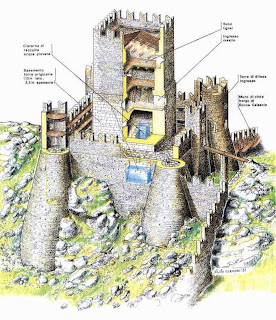 Before getting to the drawbridge you have to climb over a very stony patch and there is no rail to hold on to. 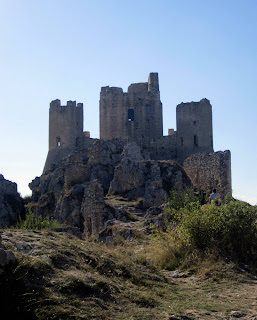 We wandered through the fortress and the wonderful weather provided us with clear views for miles over the magnificent terrain: Campo Imperatore, the Navelli plain and the majestic Gran Sasso Mountains. The absolute silence, the immensity of the surroundings and the high mountains create magical views from the top of the fortress. The atmosphere here is of the Medieval Ages, a place between reality, fantasy and imagination, silence and solitude. 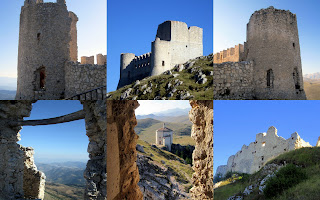 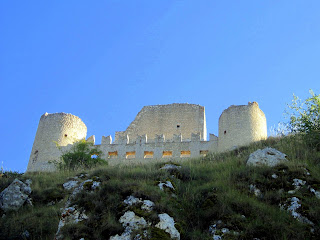 The Rocca Calascio in the province of L’Aquila is one of the most magical places in Abruzzo and this entire day made wishes come true for me. If you are looking for a guide we highly recommend Daniele. He is enthusiastic, friendly and generous and delighted to share his intensive knowledge of the region with visitors. Let yourself be carried away by the Rocca Calascio, its history and the beauty of its breathtaking landscape.

Further reading:
The Spectacular Castle, Rocca Calascio by Tatiana of Italian Slow Walks
Filmed in Abruzzo and Rocca Calascio by Bodach of About Abruzzo
An Italian Fort Worth a Walk To by Sammy of Life in Abruzzo
Getting to Calascio by Christina of Searching for Calascio
Posted by Nora at 9:27 PM