Leaving the Rocca Calascio we continued on towards Santo Stefano di Sessanio in the heart of Abruzzo. Ever since watching the movie ‘The American’ starring George Clooney, I’ve wanted to visit this scenic 16th century hill village. It looked absolutely stunning, just as it did in the film, apart from the sad loss of the tower in the 2009 earthquake. It was picture perfect; around every corner was a different postcard scene. It is no surprise that it has won the award for being one of the most beautiful villages in Italy. Abruzzo has many alluring, ancient hill towns rivalling those of Tuscany and Umbria and the region has won 19 ‘Borghi Piu Belli d’Italia’ awards which is more than any other region in all of Italy.

On entering the village I felt as if I was walking into a different era. There were many talented craftspeople displaying their trades.


Being less than two hour's drive away from Rome, nowadays the people here depend on tourism as their main source of income. In the past seven years typical aspects of village life were revived when local artisans were encouraged to move in and set up workshops. They help preserve the identity and culture of their region. With its quaint little artisan shops, art galleries, restaurants and cafés tucked into ancient stone buildings, it provides everything you could want.

In the handloom weaver’s shop local women weave woollen bedspreads, rugs and throws for sale. Others make linen embroidered bed sheets and lace pillowcases. In the tiny food stores you can purchase locally produced salami, mountain cheeses, homemade breads, jars of wild saffron, jams and pots of honey. There is also a potter’s kiln with hand-made ceramics that you won’t find anywhere else. 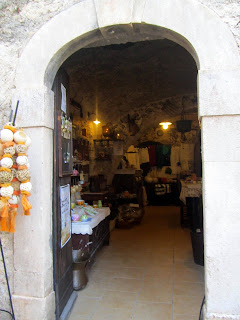 On the first weekend of September each year is the lentil festival Sagra delle Lenticchie which celebrates their famous brown lentils. Hundreds of people come to enjoy tasting different lentil dishes.

We enjoyed walking through the village enjoying its sounds, smells and beauty and best of all - no traffic, apart from the odd Ape or Vespa. 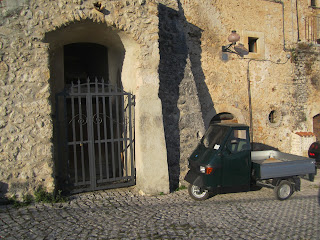 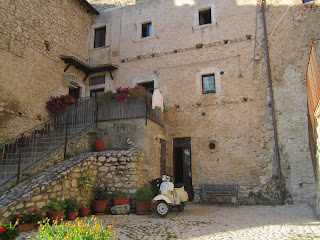 
There is a gorgeous view from the top of the village of the charming historic villages of Castelvecchio Calvisio, Barisciano and Carapelle Calvisio that surround the Gran Sasso National Park. 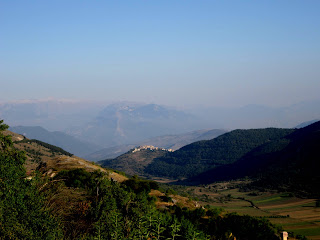 The village faces the Navelli plain. Its historic stone houses with thick walls and small windows huddle up close to one another around the perimeter. The alleys are bridged by picturesque archways.
I loved the elegant arches on this gorgeous building ‘The Palazzo del Capitano’ with its Renaissance style gallery.
Daniele, our guide, brought us through this narrow gap in the wall called ‘La Buscella’; a place where it is said that in medieval times, young lovers met to steal fleeting kisses, not being able to do so publicly. 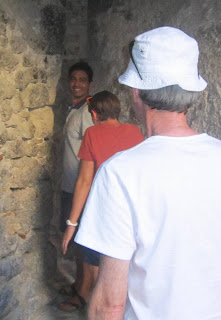 Since 2004, about a quarter of the ancient houses have been restored by entrepreneur Daniel Kihlgren (44). I found a fascinating article about him here.

With the support of architects, historians, the Abruzzo folk museum and the regional tourist board, he succeeded in reviving the village and giving it back its genuine medieval feel. His hotel Sextantio Albergo Diffuso has rooms in various buildings throughout the village. During the reconstruction, local tradesmen remained as faithful as possible to the artistic style of the past.

George and the film crew stayed here during the making of the movie. Rooms have original rustic open fireplaces and pre-war peasant furniture gleaned from local markets and antique stores. I would love to return  for a few days and immerse myself in this mountain village lifestyle.

The twisting paths that wind between the houses lead to the spot where the Tower used to stand. Now the metal scaffolding glistening in the sunlight gives hope that the tower will soon return to its former glory. 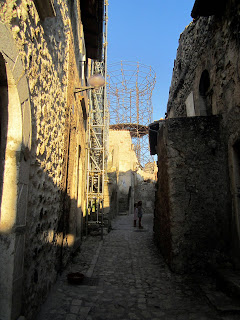 Restoration has already started and I read that it is due to be completed by 2013. I hope to return to Santo Stefano when this is done and see that magnificent view from the top of the tower. There was so much that we didn’t get to see during our short tour: the restaurants, the art galleries, the attractive church of Madonna del Lago at the edge of the lake - so many reasons to return.
We stopped for an aperitivo in a small piazza before heading off to Ristoro Mucciante for dinner. More about our evening meal in Campo Imperatore in my next post…

If you appreciate nature and are interested in local ways and culture you’ll love Santo Stefano di Sessanio. It gives you a glimpse into the authentic peasant life of a century ago, softened by modern conveniences.

Medici memories by Bodach of About Abruzzo

Icons of Beauty - George Clooney and Abruzzo in The American by Sammy of Life in Abruzzo
Posted by Nora at 9:05 PM