The traditional fishing huts that are dotted along Abruzzo’s coastline have intrigued me since I first saw them  in Francavilla al Mare in 1994. They are called Trabocchi (pronounced tra’bok-key) and last year Bodach of About Abruzzo had great close up pictures of them in his fascinating post Lunch on a Trabocco. I was thrilled that Daniele included a visit to one on his itinerary so that I could see one up close with my own eyes. This August we went to see Trabocco Punta Torre with him, just south of San Vito Chietino. 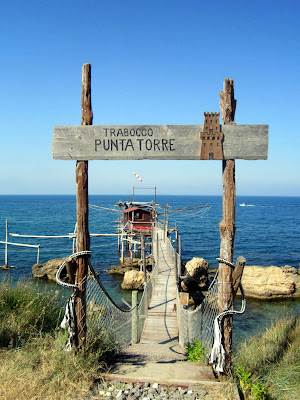 From the gravel path that leads to the trabocco, we crossed the wooden footbridge with sides made of rope. The trabocco is positioned where the sea has a suitable depth (of at least 6m) and is in the shelter of rocky peaks. A friendly local was here on vacation with his family and he took the time to show us around and answer our questions. This is typical of the warmth of the Abruzzese people.


How does a trabocco work?
Fishermen lower the huge meshed nets to the seabed from a platform at the back, then crank them up when full of fish by an intricate system of pulleys and winches. 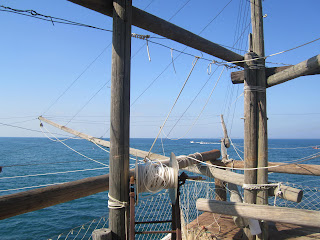 There is a large pole in the middle of the platform with a bar going through the centre horizontally. The fisherman pushes on this as he walks around in circles to raise or lower the large nets which are supported by four long arms of wood. He kindly showed Amy the fishing nets and pleased her by saying that he threw back any small fish that got caught. 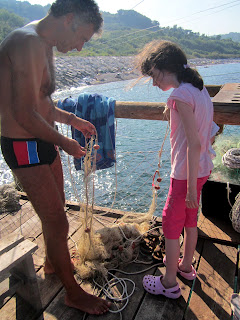 What does a trabocco look like?
To me it looks like a tree house on stilts, joined to the shore by a long wooden bridge. The famous Italian writer Gabriele D’Annunzio describes one as:
‘A strange fishing machine all made of boards and beams, like a giant spider.’


There was a small kitchen inside the hut with a gas burner, table and sink. He pointed out that the rope hammock was not part of the original trabocco (but it blended in very well). He had even slept there for a couple of nights, but said that sometimes the sound of the waves crashing against the rocks kept him awake.

Some are completely original; others are skillfully reconstructed and made stronger to withstand the Mistral wind. They need regular maintenance and are made from locally sourced acacia wood and Aleppo pine as they are water and salt resistant.

How old are the trabocchi?
They are on average more than 200 years old and originally were used purely as a unique method of fishing from the land instead of using a boat. The trabocchi are a distinctive architectural element and have become a symbol of the history and culture of Abruzzo. The Trabocco Punta Torre was built by Domenico Verì in 1873 and is still owned by the Verì family.


Where can you find the trabocchi?
They stretch from the sandy beaches of Francavilla al Mare right down to the vineyards and olive groves of San Salvo, a coastline of incomparable beauty embellished by these structures. Along the old railway line there is a lovely bike path La Via Verde which follows the coast and would be a nice way to spend a day admiring these unique fishing machines as you cycle along Chieti province coastal cycle path.

﻿
How many trabocchi are still in use?
Numbers differ depending on which site you read, but according to some accounts there are about 28 trabocchi still in operation along The Trabocchi Coast. Most are private property; some open only for events such as the Cala Lenta.  Fifty years ago there were 65 of them. Then they began to disappear one by one and risked extinction. In 1997 a new law was made in Abruzzo to finance their revival and there was a renewed focus on eco-tourism and since then the trabocco has become a symbol of protection and a tourist attraction. Some of the trabocchi on the north pier of Pescara have been gradually stranded - they are no longer over the water but are surrounded by sand.

They usually serve evening meals. (Click on the links to find out more information about them and how to get there. Some of the sites are in Italian - just press the google translate button at the top of the page.)


In recent years the owners of these ones have begun serving local fish dishes from June through September (dinner is a fixed price of €50 per person - reservations required).  There are many starters and the main course comes with homemade pasta. You can eat traditional delicacies such as octopus, anchovies, calamari, fish stew (brodetto), stuffed mussels and squid, shrimp  and prawns, seafood and fried fish of all kinds. Water, wine, coffee and dessert are also included in this price.
Next year I plan to return and have the experience of dining in one of these unique restaurants suspended over the Adriatic. The Trabocco Pesce Palombo looks like the perfect place for dinner by candlelight with a difference...


Daniele also brought us to Punta Penna Nature Reserve and the Abbey of San Giovanni di Venere on this day; read about our Journey to San Giovanni in Venere. See more of his great itineraries on his website:  http://www.abruzzowithyou.com/
Posted by Nora at 9:32 PM