On the day that we visited Trabocco Punta Torre with Daniele he also drove us to the Punta Aderci Nature Reserve. It is a stunningly beautiful area of great botanical and geological interest and is an ideal spot for birdwatchers, swimmers and sunbathers. From this beach dolphins can sometimes be seen in the distance. 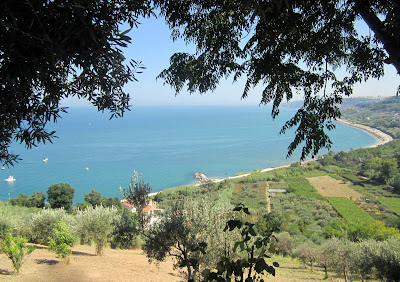 We also stopped in San Vito Chietino and walked along the gravel path past the old train station. 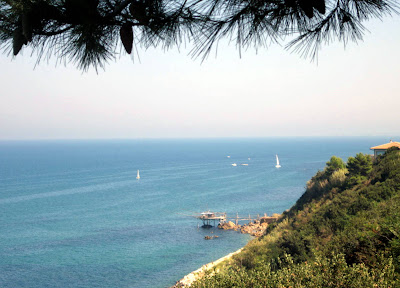 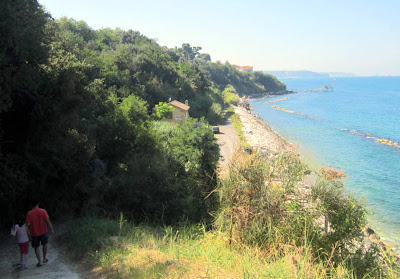 Ahead of us we could see the Trabocco D’Annunzio (also called Trabocco Turchino) and the Eremo D’Annunzio concealed amongst the cliffs and orange trees. The steep cliffs alternate with small sandy coves. The famous poet and writer Gabriele D’Annunzio spent two months of the summer of 1889 here with Barbara Fraternali Leoni. The artist Francesco Paolo Michetti recommended this place to him due to the unspoilt beauty of the landscape. During his time here he was inspired to write ‘Il Trionfo della Morte’ (Death’s Triumph), in which he describes some of the places surrounding the hermitage. He wrote:

“The chain of promontories and crescent-shaped gulfs rendered an image of a succession of offerings, with each inlet holding a treasure.” 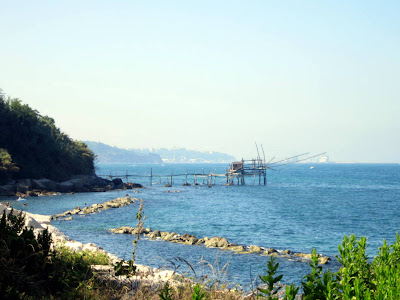 On the public sandy beach at Punta Penna we went for a swim. We had packed our swim costumes and towels with us and Daniele also brought along his colourful kite which our daughter Amy had fun flying; she even held on to it when she was in the water. You need to bring your own sun umbrella as there is no natural shade. I prefer beaches like this rather than the ones that have rows and rows of tightly packed sun loungers and parasols. 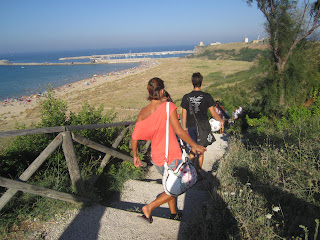 On the way back towards Pescara he drove us to the Abbey of San Giovanni in Venere in Fossacesia, one of the largest Benedictine monasteries in the region. The first thing we did there was admire the view of the Sangro River Valley in front of the abbey which stretches out over orchards, olive groves and pine woods to the sea. (See video below).

From the other side of the abbey we admired a line of ‘trabocchi’ - old fishing machines. In this picture you can just about make out four of them in a row along the coast. The light was fading at this time of the evening. This area is considered one of the most beautiful of the entire Trabocco coastline. 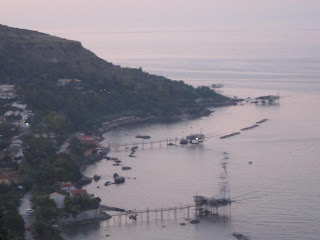 The abbey sits on a hill dominating the Adriatic coastline. At dusk it is illuminated and is a wondrous sight from all around. 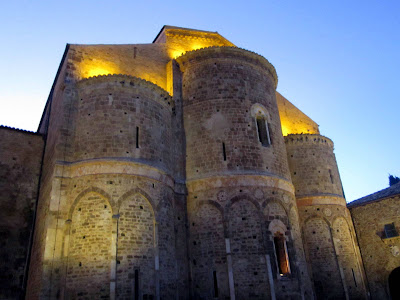 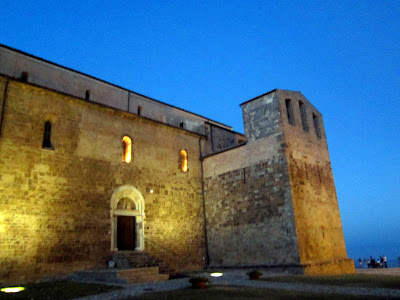 The main portal (Portale della Luna – Moon Portal) is in stone and marble and is surmounted by a vaulted arch which encloses a decorative half moon. Here images of Jesus, the Blessed Mother and John the Baptist are sculpted. 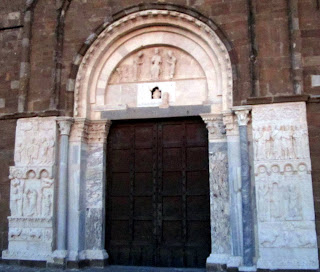 On the sides of the portal are two pilasters and columns made with different coloured marble. You can see images of the story of the Annunciation and the Visitation as well as scenes of John the Baptist, Daniel in the lion’s den and Gabriel announcing John’s birth to his father. The scene on the bottom left is of two peacocks drinking from a vase.

The interior is divided into three naves divided by twelve pillars with gothic arches and it has a high roof of wooden beams. Real treasure is to be found down in the crypt - marble pillars dating back to Roman times and frescoes dating back to the twelfth and thirteenth centuries. The frescoes were restored in October 2009. In the central fresco Christ is in the middle with saints Benedict and John the Baptist on either side. On the right wall is a panel with the Virgin and Child between the Archangel Michael and St Nicholas of Bari. 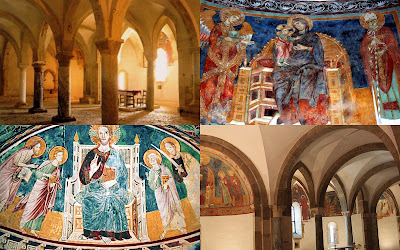 We ended the day with dinner in the café which is at the side of the abbey amid trees and flowers. They serve delicious pizza and gelato artigianale (home made ice-cream). You can see the Portale delle Donne – (women’s portal) in the background. 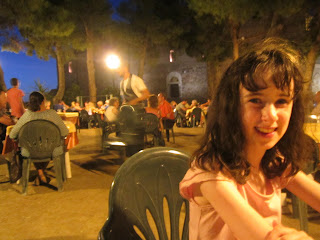 Here is a very short video showing the view from the abbey. It makes me what to be back there again...


Daniele, our guide, has several interesting itineraries for day trips in Abruzzo. See his website  for more details: http://www.abruzzowithyou.com/
Posted by Nora at 9:53 PM