Visit to The Valley of The Temples - Sicily

On a sunny spring day in March we travelled from Catania to the Valle dei Templi in Agrigento. There were no trains running in the morning so we had to go by bus. At first I was a little apprehensive about taking such a long three hour journey in what turned out to be a minibus! Despite my reservations it was quite comfortable, as we could open the windows for fresh air and there was a ten minute rest stop half way. The inland undulating landscape along the way was surprisingly green. 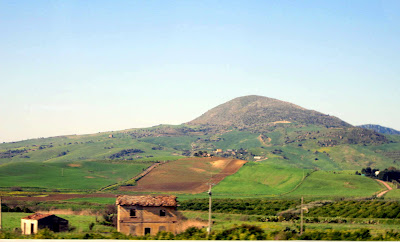 The Valley of the Temples is one of the most important archeological areas in Sicily and a Unesco World Heritage site - the ruins of the ancient city of Akragas. These are the oldest Greek ruins outside of Greece and I was so excited about seeing them. Once we got to the bus parking lot beside the train station in Agrigento we checked into the conveniently located Hotel Amici. From there it was just 20 minutes by local bus to the archeological site. I had read that the most spectacular temples were in the eastern zone so that is where we started our exploration. (The western zone is just across the road.) We got a guidebook at the ticket office to help explain things; there were also audio guides available. After paying for our tickets - €10 which included entrance to the Archeological Museum - we took a path that lead to the ruins of the Temple of Juno. Built between 470 and 450 BC it occupies the highest and most panoramic position on a hill.


As we continued along the Via Sacra we saw unusual holes in the stretch of city walls that run alongside. These were half moon shaped tombs dating back to Byzantine times called Arcosolium graves.


Next we came to the Villa Hardcastle. It used to be the Agrigento home of the English Navy captain Sir Alexander Hardcastle. He loved this valley and used up all of his personal inheritance in an attempt to bring it back to life. Thanks to his financial contribution and the enthusiasm shared with archaeologist Pirro Marconi, he was responsible for the reconstruction of eight columns from the Temple of Hercules during the years 1924-31. His house is now used as a multi-media museum and there is an elegant café nearby - the 'Caffetteria agli Arcosoli'. 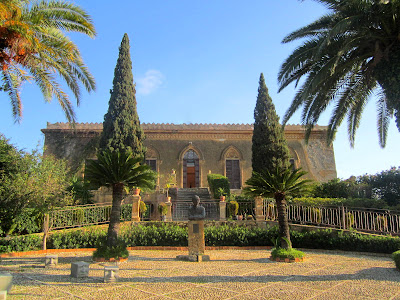 Opposite the Villa Hardcastle lies the necropolis, crypts that were created out of ancient Greek cisterns, where numerous burial chambers were dug out during the Early Christian period.

About 500 metres further on we came to the highlight of the area - the stunning Doric Temple of Concord - one of the best-preserved Greek temples in existence. 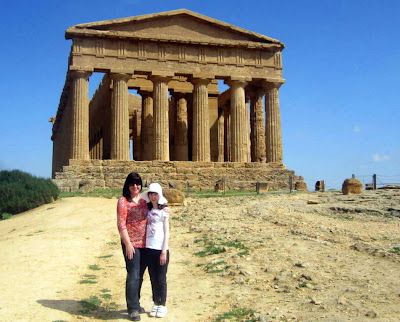 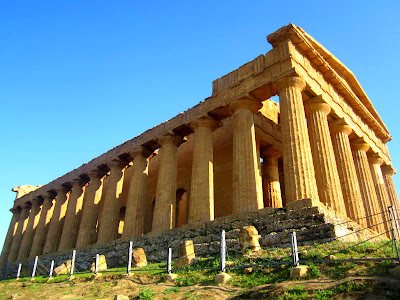 It was certainly a magnificent and imposing sight, perched on a ridge and built in order to be seen by sailors and troops arriving by sea. It is remarkable that it has survived almost entirely intact since its construction in 430BC. Alongside it that day was a contemporary sculpture, a temporary display by the Polish sculptor Igor Mitoraj. The bronze 'Fallen Angel' figure contrasted starkly with the stone of the ancient monument. 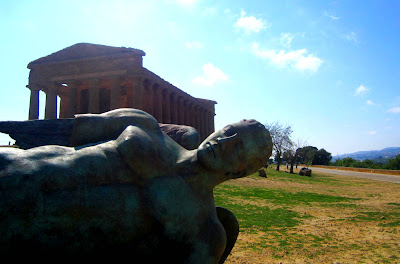 On we walked, past an 800 year old olive tree and an olive grove until we reached the Temple of Hercules, the oldest of the temples, dating from the end of 6BC. In the evening the temples take on a lovely golden hue. From this point you have a superb vista of Agrigento and towards the coast.

﻿ We spent about 3 hours here, soaking up the impressive views and the atmosphere. The place is huge; to see all of it you would really need a full day. Spring was a magical time to visit with a profusion of yellow and purple wildflowers in bloom and almond trees in blossom. Spread out over the valley and on a ridge resting between the city and the sea, you can feel what it must have been like here thousands of years ago.

The site is open every day, all year round 8.30am – 7pm. In July and August the closing time is 10pm. After sunset it is illuminated and I can imagine that it would look even more breathtaking.
Posted by Nora at 10:58 PM