Last January my family and I decided to take a winter holiday in Stresa, Lake Maggiore. We have been there in every other season and so decided to give winter a try. Skiing for the first time was also an exciting prospect. Some friends from Turin joined us for a day of fun on Mt. Mottarone, which is just one hour north of Milan.
We took the cable car (Funivia Stresa-Mottarone) from the hamlet of Carciano, up to the summit of Mottarone (1,491 metres). During the 20 minute ride up you have breathtaking views over the lake and the three islands. If you are arriving by car you could also reach the top from Stresa by going up the scenic 9km 'Borromeo Road'. 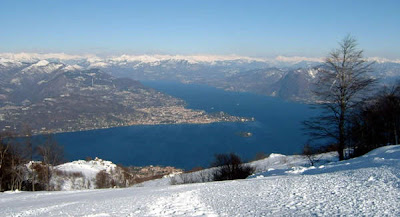 When you leave the cable car you can take the two-seater chairlifts to the summit. From the top on a clear day you can enjoy a full 360° view over seven lakes to the summit of Monte Rosa and the Alps. 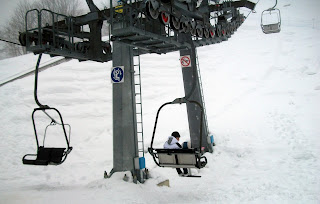 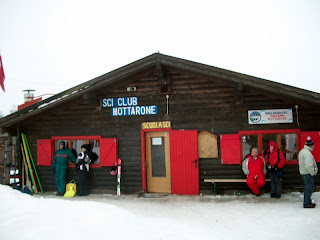 As it was our first time to ski we booked a group ski lesson at the ski school (Scuola Sci). We went on a Friday so it wasn't too crowded and there was no waiting in line. Mottarone is very suited to first timers with eight ski runs for beginner skiers and snowboarders. There are also ten ski runs for intermediates and three for expert skiers. The area also features spectacular cross-country trails. 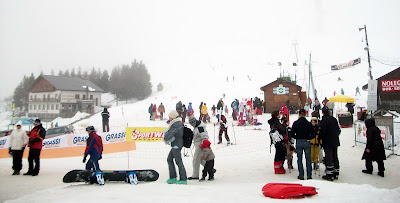 We rented the ski boots, skis, poles (and a helmet for our daughter Amy) at the ‘Sciottalolo’ rental shop near top of the chairlifts. You need to bring some form of ID when you are renting out the equipment. We didn’t know this before going, but luckily our friend Serena had hers and that sufficed. The instructor, Antonella, first helped us with the very basic task of attaching the skis to the ski boots. Serena kindly took the photographs. 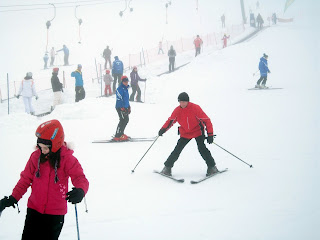 Next Antonella had us practise gliding with the skis and then we went on to a type of conveyor belt up to the first level. She showed us the technique called the ‘snowplow’. She spoke English well and had great patience with us.We had to point our skis inwards towards each other, pull our knees together and continually push our feet apart. It takes a bit of time to get used to this strange position and I used muscles that I didn’t even know I had.

We learned that as the skis become more parallel, the faster you go; the more you snowplow, the more you slow down. In order to stop, we were told to just snowplow more widely and with more tilt. It helps if you have strong legs and have a good sense of balance. We practised this over and over going to a higher level each time. 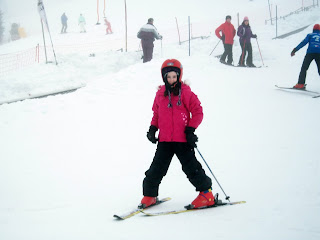 Our daughter turned out to be a natural skier and showed us up. She had no fear at all and I think this is what made the difference. We were worried that if we fell over we might not be able to get back up or look foolish attempting to do so. I was surprised just how hard it is to ski but did have fun trying. It looks so easy when you watch other skiers; even little ones could manage really well. I’ve heard that after the first 3-6 hours you get the knack of it. 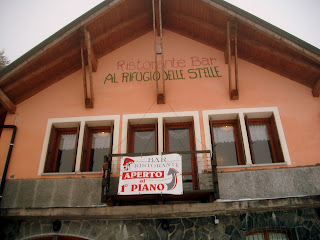 Afterwards we had a lovely lunch at Al Rifugio delle Stelle which is beside the ski school. Their menu of typical Piemontese foods included: polenta with mushrooms, game, veal, a good selection of regional wine and homemade pastries. The room has lovely views of the Alps and Monte Rosa.

We finished off the meal with a drink of the traditional local specialty Fil da Fer (as recommended by Dana of Stresa Sights). It is made from whiskey, milk, sugar and egg yolks and served warm. The others wanted theirs with whipped cream on top and said that it tasted like a dessert. It was a big hit with everyone. 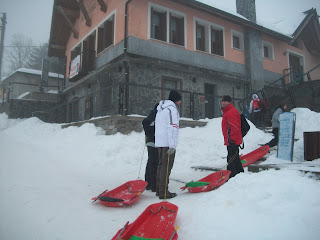 After lunch we rented snow sledges. It cost €5 for the afternoon and they provided hours of fun. Later in the day we chose to go back down to the cable car by the alpine coaster/bobsleigh called Alpyland – 750m of toboggan track with speeds of up to 40kph - it was thrilling! 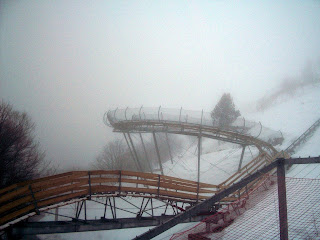 Younger children might enjoy the little ski train operates every day from December 26th to January 9th and on weekends throughout the year. 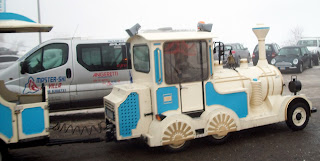 If you are in the Milan area and fancy going skiing why not give Mottarone a try? It is a great experience and highly recommended. It is a fantastic place to visit and by the way, January 22nd is World Snow Day!