The town of Capestrano, Abruzzo 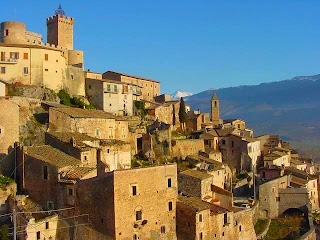 The dramatically perched hilltown of Capestrano
Capestrano is a stunningly picturesque town of only 960 people in the province of L’Aquila in the Abruzzo region. It encapsulates everything I love about small town Italy. The people there are so friendly, especially to visitors who are few and far between. Hospitality, warmth and time is something they have in abundance. They make you feel so welcome and are proud to show off their area. It has wonderful restaurants, a fabulous gelateria and café called Bar Tagliente in the main piazza, churches, a monastery, an abbey, a gorgeous lake and a beautiful lofty towered castle atop the hill overlooking the town! It is set in a perfect location, 40km west of Chieti, on the edge of the Gran Sasso National Park, 160km east of Rome and only a 25 minute drive from the Adriatic coast.

From its elevated position, this dramatically perched hilltown, 500m above sea level, gives spectacular views down the striking Tirino valley, dotted with aged olive and almond trees. The town is known not only for the Capestrano Warrior, but also for being the birthplace of the famous Franciscan monk Saint John of Capestrano (1386-1456) after whom the town was named. Incidentally, the town is twinned with San Juan Capistrano in California. (They spell it a little differently). In walking distance from the pretty main piazza is the magnificent monastery of St Francis erected by Saint John of Capestrano dating back to 1400. 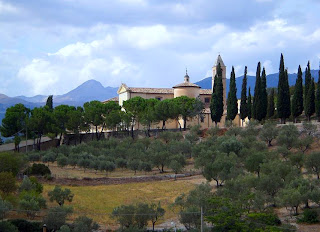 Photo of  the St Francis Monastery from Wikipedia
The majestic Capestrano castle was built in the 13th century, next to the Tirino River and the Abbey of St. Peter ad Oratorium. I’ve translated some of the history relating to the castle from the website www.comunedicapestrano.it. The first document that refers to the name of Capestrano dates back to 1284, when King Charles I of Sicily gave the castle to Riccardo d’Acquaviva, the marquis of Capestrano. In 1462 the castle passed on to Antonio Piccolomini, nephew of Pope Pius II, who enlarged the castle with new towers and battlements. By 1579 the castle was known by its official title ‘Piccolomini Castle’. Then it was sold to the Grand Duke of Tuscany and in 1743 was owned by the King of Naples. In 1860 it passed on to the Savoys. 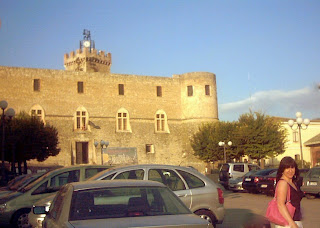 Capestrano Castle
These days, Capestrano castle is the headquarters for the mayor of the town and as a result it’s very well preserved and is the site for many of Capestrano’s annual festivals. Admission is free – which I think is unusual in Italy. My friend Gianluigi once quipped that: ‘Only the air in Italy is free’! 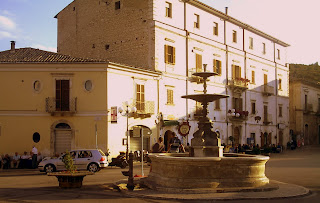 I took my pictures on a balmy August evening as the sun was throwing its golden mellow light across the rolling landscape and the soft shadows of the buildings were beginning to lengthen. We had a lovely stroll around the cobbled, steep medieval streets with their narrow winding alleyways, before touring the charming castle, monastery and its beautiful frescoed cloister. 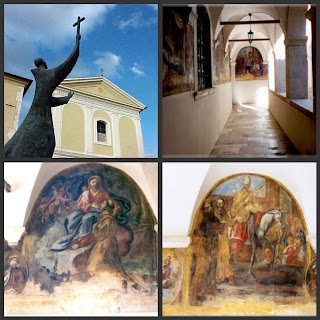 Statue of St John of Capestrano and frescoes in the cloister

In the vicinity of Capestrano you can also visit the charming Romanesque church of San Pietro ad Oratorium (1100) and admire the sparkling, clear waters of pretty Lago di Capo d’Acqua.

Recommended restaurants in the area are: Ristorante San Giovanni in the main Piazza del Mercato and in the nearby village of Preciano, Ristorante La Sorgente, Via Presciani, 36 (which serves trout and freshwater shrimp from the Tirino River).

*Update: For a more detailed and interesting account of Piccolomini Castle and its history have a look at Tatiana's post on her Italian Slow Walks blog - a beautiful blog with wonderful photos and descriptions of special places in Abruzzo.

** Another interesting post about Capestrano with great photos can be found on Bodach's excellent blog About Abruzzo.

Anyone who is fascinated by art, history, architecture, beautiful landscape, regional foods and folk traditions will love this idyllic town of Capestrano! To end, here is a little slideshow that I made of the town: