Hermitages and Churches in Abruzzo

Last month we took an amazing excursion with Daniele of http://www.abruzzowithyou.com/ to two hermitages of extraordinary beauty, two abbeys and a magnificent hill-town church. Included in his itinerary were:

They are not easy to get to using public transport, so going there with a knowledgeable guide like Daniele is the ideal way to visit them.

Daniele picked us up after lunch outside our rented apartment in Montesilvano. First we came to the Cistercian abbey of Santa Maria d’Arabona in Manoppello.


Next we saw the beautiful abbey of San Liberatore a Majella in Serramonacesca. We took the enchanting path behind the abbey along the Alento River past ancient rock tombs, pools and little waterfalls. 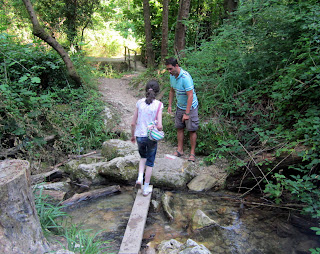 The striking church of Saints Valentino and Damiano with its twin belltowers is in the gorgeous hill town of San Valentino. The church, which was built from stone from the Majella in the second half of the 18th century, was designed by the noted architect Luigi Vanvitelli, who also designed the palace at Caserta near Naples. In front of the church, between the two flights of steps which lead to its door, is the lovely Fountain of Sansone.

If you are ever in the little hill-town of San Valentino, I recommend that you taste their homemade ice-cream 'Crema di San Valentino'. 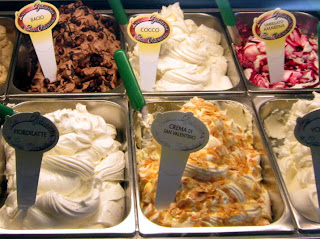 The picturesque hermitage of Eremo Santo Spirito is immersed in the fabulous scenery of the Majella Mountains. Unfortunately it was closed when we got there. Had it been open we would have been able to see a simple church, sacristy, monastic complex, chapter hall, library, winter chapel and refectory. Celestine V lived there from 1274 to 1276 before he became Pope. With a car you can drive to within 100 metres of this hermitage.

We had a very enjoyable half hour walk through the Majella National Park on the way to the Hermitage of San Bartolomeo, which was the highlight of our trip. It is in an isolated spot but the walk there is not too difficult and the landscape is absolutely stunning. 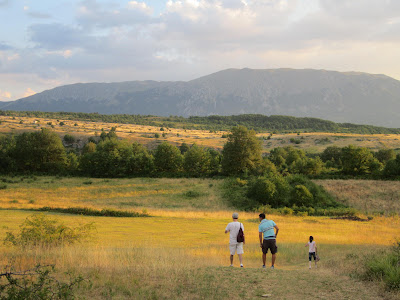 The hermitages rises beneath a rocky spur that covers it completely. The refuge itself can also be reached from the other side by a 'sacred staircase'. The only furnishings inside are the simple altar holding a statue of Saint Bartolomeo and a few wooden chairs along the side walls.

When we arrived the only other person there was a mysterious, bearded, long haired, barefoot man dressed in orange robes. He pointed to my camera and waved his finger as if to say not to photograph him. He had piercing brown eyes that I will never forget. He had lit some incense inside the small chapel which wafted through the air and contributed to the atmosphere of calm. I kept my sunglasses on inside because my eyes were welling up with tears with the indescribable sense of peace that I felt there. This place has an ancient energy and being there was truly a spiritual experience. 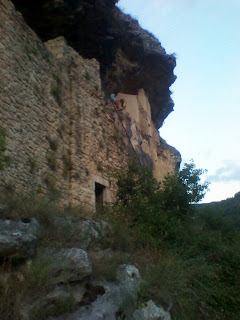 (John took these two photographs with his mobile phone.)

For more information about this hermitage, go to Sammy's blog www.lifeinabruzzo.com where she wrote a superb detailed account of her visit to the Hermitage of San Bartolomeo. Noel from www.abruzzo.com added exquisite close-up photos of the wildflowers and butterflies that he took the time to photograph along the way in his post entitled 'A Sanctuary in the Majella'.

We ended the day with delicious dinner in Osteria Belvedere in Roccamorice. Passing through that town in the evening we could see many of the townspeople out on the streets, chatting and eating together at outdoor cafés and restaurants in a warm, lively atmosphere. It was beautifully lit up and was the kind of town that I'd like to spend more time in, to return to in order to get to know it better...

Last year we took other great tours with our excellent guide Daniele. I wrote about them here:

The Magic of the Rocca Calascio
Posted by Nora at 11:27 PM 5 comments: 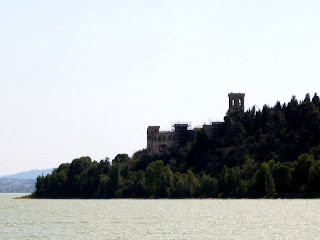 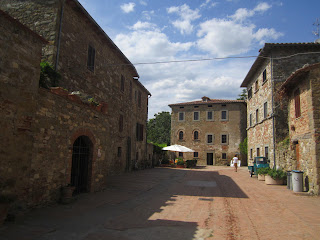 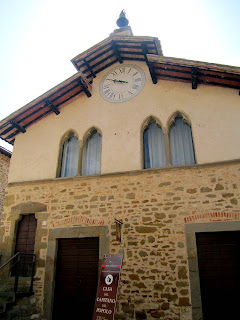 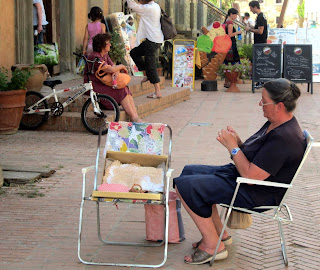 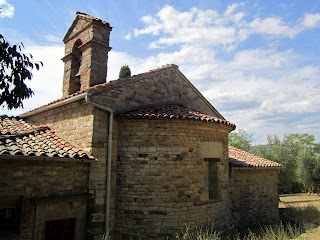 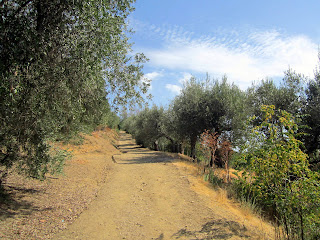 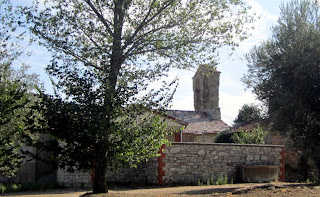 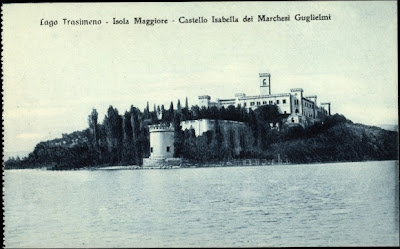 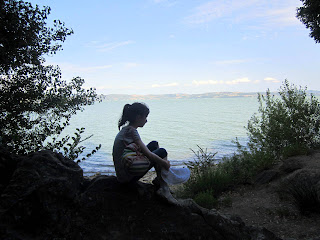 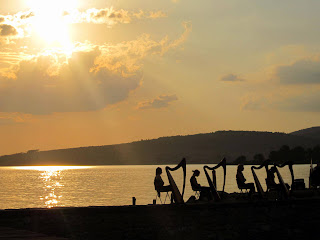 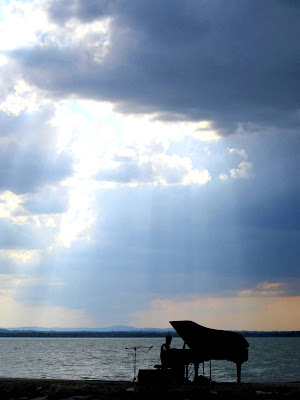 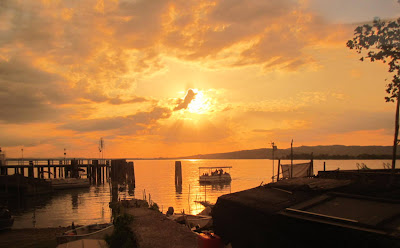 The Foods of South-Eastern Sicily

We spent almost two weeks in the beautiful southeast of Sicily visiting some of the dazzlingly beautiful Baroque towns of the Val di Noto: Catania, Ragusa Ibla, Modica, Noto and Scicli. The breathtaking architecture charmed us just as much as the exotic new foods that we tried there. The Greeks, Romans, Arabs and Normans have all influenced Sicily’s architecture as well as its cuisine and this is what makes it so different from the rest of Italy.

Here are my 10 favourite Sicilian foods:

1. Sicilian antipasti – they are full of contrasting flavours: caponata – a ratatouille of vegetables (usually aubergines, green olives and peppers) in a sweet and sour sauce, stuffed sardines, herring, salumi and a variety of cheeses. 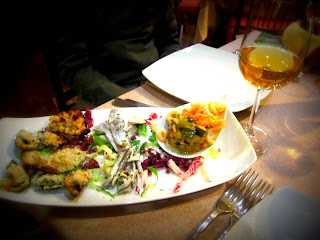 3. Cassata Siciliana – a rich dessert made of sponge cake sprinkled with Marsala wine and filled with ricotta and chocolate chips. The sides are covered with marzipan and the top with fondant icing and then it is decorated with candied fruits. 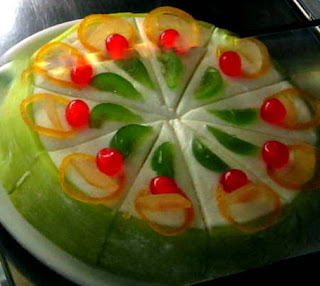 
Another delicious pasta dish is Ravioli al pesto di pistacchi - ravioli filled with fresh ricotta and covered with a pesto made of pistachios from Bronte, then dusted with cocoa powder. 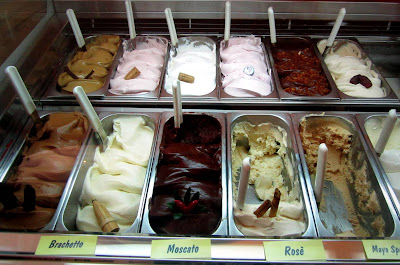 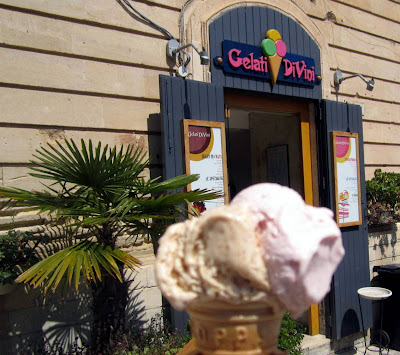 7. Arancini - the much-loved street food called ‘little oranges’ are delightful golden balls of deep-fried saffron rice, stuffed with tomato ragu, peas and mozzarella cheese. The rice balls are rolled in flour, coated with beaten egg and covered in breadcrumbs and are best eaten hot. In Palermo they’re shaped like oranges and in Catania they're more pear-shaped. They make a quick, satisfying lunch.

8. Cannoli – Sicily’s most famous dessert – fried pastry tubes filled with sweetened ricotta and chocolate chips then dipped in chopped pistachio nuts and a candied cherry is added to both ends. In Catania we found a pasticceria where we could watch them being filled at the last moment (preparati sul momento) so that the pastry didn’t have time to go soggy. 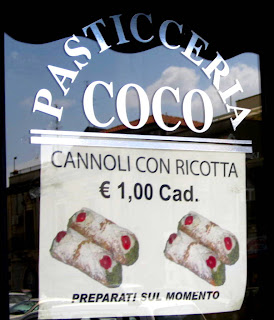 ﻿This is just a small selection of the variety of sumptuous foods that you can find in Southeastern Sicily. No doubt I've  left out many more popular dishes that are worth mentioning. Which Sicilian foods would you recommend?

Here is a clickable link to reader Paul's great recommendations for food in Sicily - in particular the use of wild foods such as fennel, asparagus, prickly pears, capers, sweet chestnuts and mushrooms. http://www.wildfoodandrecipes.co.uk/2010_09_01_archive.html
Posted by Nora at 8:49 PM 6 comments: